When I first met George Hawkins Jr, he was playing bass and singing in a local band in Ojai, Ca. It was 1973, and the Loggins & Messina organization had moved there to Jimmy’s ranch, the Mother Lode, to rehearse our next album.

I could tell he was a really good bass player and singer, but what I remember most about George was his stage presence, his enthusiasm. I sensed he’d be a great addition to the new L&M band, but what I didn’t see coming was his wicked sense of humor, which would keep the road fun and, well, … interesting for years to come.

Nowadays, the one word most often used to describe George is, “Sweetheart.” But it wasn’t always that word. Trust me. George was “salty,” to say the least. The young George I originally met was very funny, of course, but mostly sarcastic, and often very cutting. You were careful not to get on his bad side. There was always an undercurrent of deep anger and impatience. To me he seemed like The Righteous Avenger, constantly on the lookout for hypocrites, ready to slice them up with his sharp wit.

Even as a young man, George had little tolerance for all things pretentious or phony. He hated playing the game, and too often pop music required compromises he had difficulty reconciling.

I remember when we filmed my “Alive” show at the SB County Bowl in 1980, the director had pre-made signs for the audience to hold during the show, like: “Welcome home, Kenny” and “We love you Kenny.” When George saw them during soundcheck, he jumped off the stage, ran into the stands, and started ripping them up; totally pissed off by the premeditated show-biz dishonesty.

As George matured, however, his desire for unadulterated honesty, for the straight truth, softened from the defensive stance of a young warrior into a more compassionate one. Rather than judge others harshly, he now aimed that scrutiny at himself, and subsequently strove for the truth in his own life. He faced his own shortcomings head on, and they taught him to lighten up on everyone else’s … and then ultimately, on his own.

He simply wasn’t afraid of the truth. He loved it. A few months into his cancer treatment, my road manager, Wayne Holmes, asked him if he was open to talking about it. “Oh, speak about the unspeakable?” he replied with his huge Cheshire Cat grin, “Let’s DO!”

When I left L&M, George came with me into my solo years, from Celebrate Me Home through Keep the Fire.

Unfortunately, in the mid-80’s he and I had a falling out. I can’t recall exactly what it was about. I don’t know if George did either, but I do know that at the time it was definitely fueled by substances neither of us should have been ingesting. It would be many years before we could come back together again; after we’d both had wives and kids, divorces and losses enough to soften us into two men able to forgive the younger versions of ourselves and move on into the present.

In 2008, thanks to a Loggins and Messina reunion, George and I finally re-met; this time as simply two old friends with shared wounds and scars, like war vets, ready to meet each other where we stood now, and just let the music and our many miles covered be the glue of a new friendship.

Right away I could see in his eyes he’d changed. The anger was gone. He spoke with humor and compassion about his past grudges, his wives, and even himself. He lovingly expressed his gratitude for the early days we’d shared together, and my old fears melted. We instantly felt that ephemeral kinship that had initially brought us together in the ‘70’s, but now transformed into a brotherhood founded on forgiveness and gratitude that would last the rest of our lives.

Where most musicians grow more reserved as they mature, George Jr would grow more into joy throughout his life. On stage, as he became a master on his bass, that artistic freedom allowed him to simply have fun, to reinvent the music and enjoy each moment; and his joy was contagious.

But George had earned his happiness. He’d seen hard times, and he was willing to take responsibility for his part in making them happen. He had decided to “change his mind,” so he set about the daunting task of retraining his thinking, taking care to say exactly what he meant, in as kind a way as possible. Even though I could see in his eyes that he always secretly knew what he was up to, he unabashedly practiced “the willing suspension of disbelief.”

He saw through the bullshit to the part of life that’s simply a choice, and I watched him choose to be happy. 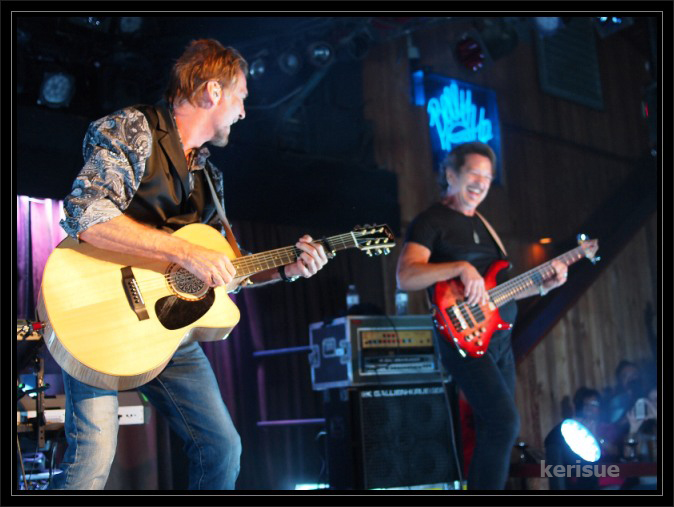 The George I re-met after our years apart had somehow healed his broken heart, healed his angry, wounded self to the point where his old sarcastic humor had merged with his compassionate heart, so much so that more often than not it was himself he’d be making fun of. He had become a positive thinking cynic.

To me, it was like watching a master magician turn shit into doves!

Honestly, when I first saw him doing it, it was confusing to me. I mean, we were obviously about to go into a train-wreck of a show, so I really wasn’t sure if he was kidding or not, with his wide eyes and prankster smile scarily reminiscent of the old George, loudly declaring “THIS IS GONNA BE GREAT!!”.

But he wasn’t kidding! And ya’ know what? Somehow, even though he could clearly see what was what, he meant it, and his real enthusiasm would convince my cynical mind, and it would suddenly all be great! I gradually realized I was witnessing something I don’t think I’d ever seen before: a man who had miraculously become comfortable with the paradox of faith and cynicism.

Over the years George became one of the most spiritual guys I knew, though he was never preachy. I think his spiritual practice was really all about love and gratitude. His path through his pain had somehow led him to forgiveness. In his last few years I watched his heart grow even more, and I believe his love for his children eventually extended to everyone around him.

I’m not saying he was some kind of saint, and I know he’d hate for me to portray him as one. I can hear him chuckling at me now for even writing about him like this.

Not everyone knew this “peaceful George 2.0,” but this is the one I got to know from 2008 on, and all the guys in my band and crew concur: George Hawkins Jr was a fuckin’ sweetheart!

A couple months before he passed, he admitted to me that his relationship to the cancer had dramatically shifted. He said, “When I used to hear someone say, ‘This cancer was the best thing that ever happened to me,’ I’d think, ‘Fuck you. That’s a crock of shit!’ But you know what…? It IS! This cancer HAS been the best thing in my life! I can honestly say that it’s opened my eyes.” And then he cried.

The day after George passed I heard from Richard Marx, another dear friend of his, who was also in shock. “Why do the best guys go first?” he said. “I’m gonna miss George so much.”

I agree, of course, but on the other hand, because he’s passed, I actually feel like he’s closer to me than he ever was. There are no boundaries. I can summon him whenever I want. I like to think I have a friend on the other side, and God knows I need all the help I can get.

Because of George, I have begun to adopt his practice of forgiveness and proactive happiness. (I gotta tell ya, it ain’t easy.)

When in doubt, when things look difficult, I’m going to think of George and remember that how it goes is just a decision.

Whenever things seem to be turning to shit, whenever I need a reminder, he’ll be there to smile and say in his silly, hyper-enthusiastic way, “This is gonna be great!”

Thank you George for having the courage to live your truth.

God bless you, my brother. I know God’s happy to have you there. You’ll make heaven a lot more fun.